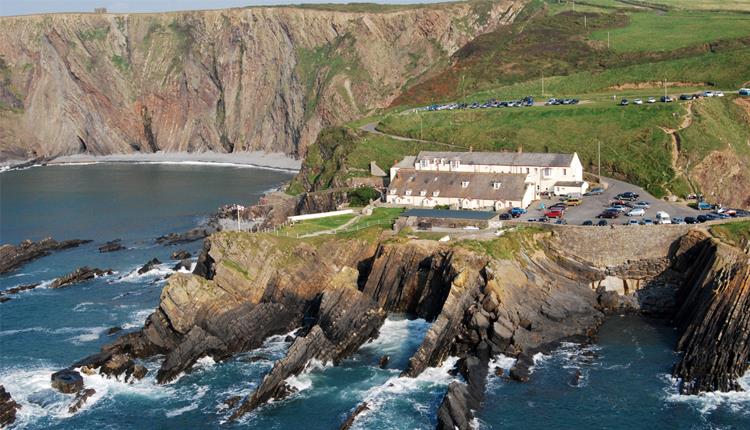 Located on the edge of the Atlantic Ocean on the beautiful unspoilt North Devon coastline, Hartland Quay provides refuge and refreshment for walkers on the South West Coast Path, Day Trippers or those wanting to get away from it all.

For centuries artists, naturalists and visitors have been drawn to this stunning corner of the Hartland Peninsula with its huge cliffs, sandy and rocky beach and view to Lundy Island. Access to the beach is by the slipway which is also accessible to wheelchairs.

The main building has been a hotel since 1886 with its original stables converted into The Wreckers Retreat Bar. The original corn and hay lofts are now comfortable ensuite bedrooms. The family-run hotel has thirteen bedrooms with Standard and Sea View double, twin-bedded and family rooms. A three bedroom annex, ideal for families or small groups, sleeps up to seven guests.

The Wreckers Retreat bar and restaurant serve locally sourced food and ales all year round from 11am daily.  Recently refurbished and full of character, the bar and restaurant feature memorabilia charting the history of Hartland Quay, the many films and TV shows filmed here, as well as displays of shipwrecks on the coast over the centuries. In good weather outside tables enjoy stunning views and the sunsets at Hartland Quay are unforgettable. The only lights to be seen are from lighthouses further down the coast. Dogs on leads are welcome in the Wreckers Retreat Bar (when accompanied by well behaved owners)!

Good English breakfasts are served in the Dining Room which can also be hired for special occasions.

Beautiful walks abound from the hotel. Hartland Quay is situated on the South West Coast Path and the surrounding area is designated ‘Heritage Coastline’ and an ‘Area of Outstanding Natural Beauty’. The cliff walks, with their extensive coastal panoramas and abundant wild flowers are on a par with walking anywhere in the world. Peregrine falcons, oyster catchers, cormorants and seagulls are all around. Buzzards abound in the woodlands. Dolphins and seals can be seen in good weather in the bay. Good swimmers enjoy the clean water off the Quay in the right conditions and the sandy and rocky beach is accessible at low tide from the slipway.

Explore the history of Hartland Quay and its spectacular coastline inside the Hartland Quay Shipwreck Museum.  Many colourful displays tell the story of four centuries of shipwrecks, of the locally based, heroic life-saving services, and of the men and ships which traded from Hartland Quay.

The history of the Quay is displayed from its beginning in the reign of Henry VIII to its destruction by the sea more than a century ago. Other exhibits describe the local flora and fauna, bygone industries of the area and smuggling, wrecking and rescues

The Museum and Hartland Quay Gift Shop are open throughout the season from Easter until mid-October.

Hartland Abbey and Gardens, Docton Mill Gardens, Hartland Point, St. Nectans Church ‘the Cathedral of North Devon’ and world-renowned Clovelly are nearby. Hartland Village with its potteries, artists and craftsmen, post office and Coffee Shop is 1 ½ miles away. Barnstaple and Bude are 16 miles away, Exmoor and Dartmoor National Parks approx 1 hour with the historic cities of Exeter and Plymouth

*As a guide, prices are per room per night for hotels, guest houses, B&Bs and serviced apartments and per week for self-catering accommodation.

From the M5, come off the motorway at Junction 27 (Tiverton) and follow the A39/A361 for about 90 minutes until you reach the right-hand turn for Hartland, just past Clovelly. Drive through the village of Hartland following signs for Hartland Quay and Stoke.  Keep going until you reach the Atlantic! Our postcode for Sat Nav is EX39 6DU.  This will bring you to the church in Stoke, from where you just need to continue another half mile. Please be advised that we are approximately 15 miles from the nearest petrol station, so please fill up on your way here!

The nearest Train Station is Barnstaple. From here, a bus service operates to Hartland Village, approximately 2.5 miles from Harltand Quay. Transportation from the village can be provided for overnight guests if contacted in advance. Bus timetables can be found at https://www.stagecoachbus.com/