You are here > What's On > British Firework Championships 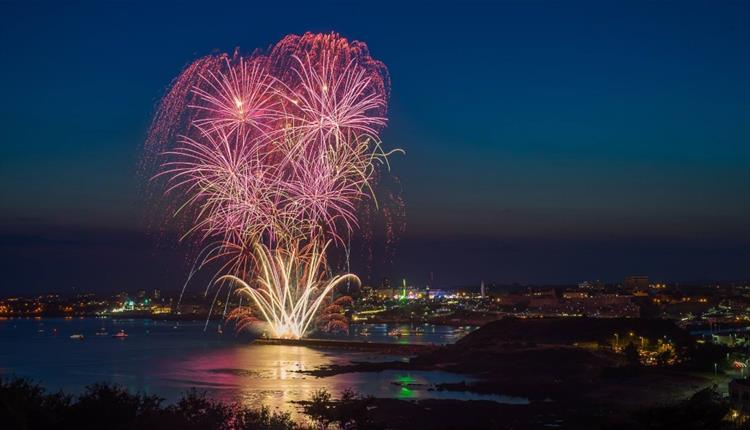 The world famous British Firework Championships is set to return to Plymouth's waterfront on Wednesday 14 and Thursday 15 August 2019.

Enjoy spectacular pyrotechnics that will illuminate Plymouth Sound as six top firework companies battle it out over two nights, each putting on an awe-inspiring ten minute display in an attempt to be crowned the winner.

Free entertainment starts from 2pm with music, fairground rides and refreshment stalls on Plymouth Hoe. The firework displays generally begin on each evening as dusk falls at 9.30pm. Spectators are advised to arrive early to get the best possible vantage point on Plymouth Hoe, which offers the perfect viewing platform for this truly incredible competition. The Tinside Lido is offering entry at £2 per person from 7pm on both evenings. Free deckchairs and sun loungers available.

Each team will put on a 10-minute display, and the winner will be declared on the Thursday 15 August after all displays have taken place.

The Sutton Harbour lock gate and pedestrian footbridge will be open until midnight on both nights of the British Firework Championships, however it will be closed from 10pm to 10.45pm due to maritime traffic re-entering Sutton Harbour.

Disabled Parking on the Hoe

All visitors arriving by car are encouraged to use Plymouth’s Park & Ride services, which provide a quick and direct service to Royal Parade where passengers can either walk approximately 10 minutes up to the Hoe. All three park and ride locations will operate throughout both evenings.

The last buses leaving for the city centre are:

For return journeys from Royal Parade, pick up points and final departure times are as follows:

Normal fares apply with a group dayrider ticket costing £7.60 for up to 5 people, and the group dayrider plus is £11.60. There are cheaper group return tickets from the park and ride sites £5.40 from Milehouse, £5.80 from Coypool and £6.80 from the George.

• Service 1 to Tavistock now operates every weekday night at 11pm and midnight (12am - arrives Tavistock at 12.52am)

• Service 2A extra at 11.20pm to St Stephen and Latchbrook

* Stagecoach service 2 to Hooe & Mountbattwn will only operate as far as Green Park Rd after 6pm due to congestion beyond here with traffic going to Mountbatten and Jennycliff to view the Fireworks.

The 11.23pm from Mountbatten will operate as normal and be extended to Royal Parade instead of terminating at the Morley Arms.

GWR will provide an additional later service on the Tamar Valley Line over both evenings of the British Firework Championships.

All services will operate both days.

Across the two day event Cross Country will be putting on the following two additional services:

• Hoe Approach – Residents only, Road Ahead Closed. No Through Road 4pm to 11pm