You are here > Things To Do > Sidmouth Toy & Model Museum 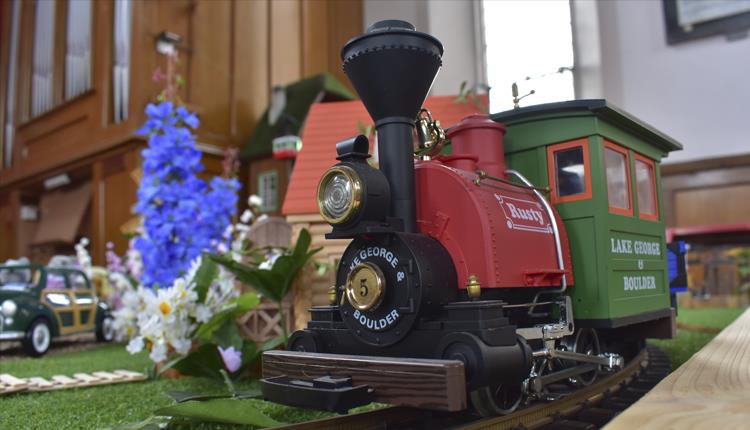 The Sidmouth Toy & Model Museum first opened in August 2020. The museum contains the collection of vintage and modern toys and models collected by Ian and Rebecca Gregory over a period of 40 years.

The museum is located within The Old Chapel, Chapel Street, Sidmouth, previously the Sidmouth United Reformed Church.  Ian and Rebecca bought the property in 2017 and spent the following two years renovating the property, including a new roof, internal plastering, and redecoration.  The result is a stunning environment in which to display the collection. The property was subsequently transferred to a Charitable Trust which also operates the museum.

The collection originally comprised of Corgi and Dinky model cars from Ian’s childhood in the 1960s.  Also, a key exhibit is the Tri-ang Centurion pedal car which Ian had as a young boy.  Bought second hand by his father for £1 in 1959 in remained in Ian’s possession until 1966.  It was found over 30 years later in an exhibition at the National Motor Museum, Beaulieu.  Ian repurchased the pedal car and the restored car is now on display in the museum.  You can read the exciting story of why Ian knew he had found his old pedal car in the museum.  Two further pedal cars of a similar age are also on display as part of a teddy bears picnic exhibition.

Over the years the collection has expanded to include many Tri-ang tin plate lorries, 0-gauge model railway, model aircraft, and ships.  A unique model of the Titanic made from 22,000 matchsticks is included and two unique Steiff automatons can be viewed.  Toys associated with film and TV are also on display.

An indoor model village has been created with a G gauge model railway and cable car.  This display is particularly of interest to younger aged children.  The centrepiece of the museum is a working 00-gauge model railway.  The layout is used to showcase several vintage building and construction kits of the same scale. The railway has many iconic model locomotives and also includes the Hogwarts Express from Harry Potter.

Modern toys include a Star Wars exhibit and a Harry Potter display.  Both include some rare models including some which had been built specifically for the museum.

There are also various displays of vintage dolls and more recent dolls including Barbie and Sindy models. Toys in the form of household appliances can also be seen. Also, a range of board games and educational books from 1930 onwards are on display.

We are always interested to hear of model and toy collections that owners would like to display within the museum. Recently a model of a Victorian Theatre featuring “Cinderella” was loaned to the museum for display.

As the museum is located within a church building the opportunity has been taken to include details of the church history. The church organ originally built in the mid-1800s continues to work and is played from time to time. The church also contains a number of plaques commemorating past lives, including those associated with the church who gave their lives in World War 1. At Christmas time the museum includes a festive display.

A visit to the museum provides a trip of nostalgia for many.  For the younger generation it provides an opportunity to see how their grandparents and parents may have enjoyed childhood.  Most visitors to the museum spend between 45 minutes and one hour viewing the displays. The museum was designed to have a one-way system and this arrangement meets the current Covid regulations to ensure appropriate social distancing is maintained.

We look forward to welcoming you to our museum.

There is no car parking available at the museum, but many public car parks are available close by.

The museum is located in the heart of Sidmouth just yards from the sea front.

Audible alarm system
Seating available throughout the attraction at appropriate intervals, for visitors with limited mobility