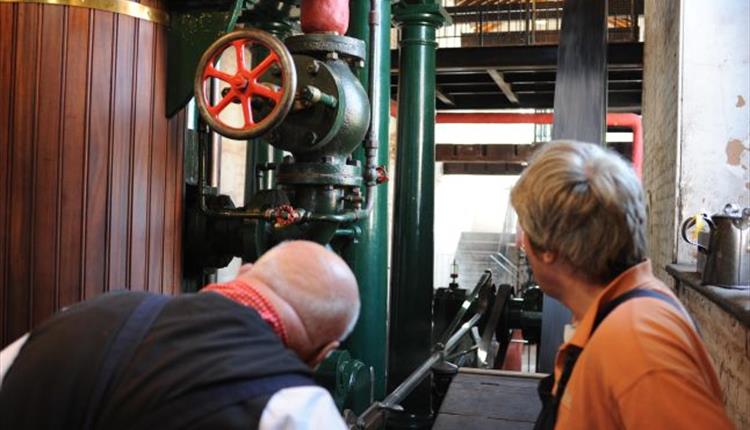 Coldharbour Mill Museum currently remains closed as an effect of the COVID-19 pandemic. The team are working hard to reintroduce our volunteer teams to the site, with a public opening coming at a later date. To keep up to date with re-opening please visit www.coldharbourmill.org.uk

Coldharbour Mill is one of the oldest woollen mills in the UK having been in continuous production since 1797 and is recognised by Historic England as “probably one of the best-preserved textile mill complexes in the country”.  Largely untouched since the industrial revolution, the rich heritage lives on as it continues to use the traditional looms and machinery to produce high quality knitting yarn and fabrics using methods handed down through generations. It is a working wool museum where visitors are not just able to relive the sights and sounds of the industrial revolution, but also see craftspeople making traditional textiles, beautiful knitting yarn and hand-woven rugs. Mentioned in the Doomsday Book, the mill was originally a grist mill which is still present on the site but changed to a woollen mill to respond to the ample resources – including sheep and water the site presented.

The café and shop are open to the public when the museum and factory are open.

Originally Coldharbour Mill was owned by world-renowned textile producers and Quakers, Fox Brothers. In 1796, aged 49, Thomas Fox, the son of a Cornish Quaker, took control of the family business in Wellington and renamed it Thomas Fox & Co. Despite a decline in the textile industry at the time, he had plans to improve the business and the machinery it used. It was his idea to purchase the Coldharbour Mill site in Devon and build a new factory there.

Six of his seven sons joined the family business, which then became known as Fox Brothers & Co, it became one of the largest textile businesses in Britain by the late 19th century, employing about 5,000 people

As part of a Quaker family, Thomas Fox believed in looking after people. He acquired around 70 cottages near Coldharbour Mill to provide reasonably priced accommodation for his workers and established a “Working Men’s Institute” in Uffculme for “Recreation and Improvement” which still exists today.

From the time of World War I, Coldharbour Mill spun worsted yarn for the puttees that Fox Brothers supplied to the military - a puttee is a length of fabric that gave extra protection to the legs of soldiers in combat. During the wars over 12 million pairs of puttees were made along with over 7 million yards of khaki serge for military uniforms – making it one of the largest suppliers to the military. This was done at the same time as the company was producing the high-quality fabric that clothed the likes of Winston Churchill and other notable 20th century figures.

Fox Brothers were also credited with being instrumental in bringing the industrial revolution to the South West. The water wheel gave way to an impressive steam complex which remains at the Mill today. The steam complex is complete with the original Lancashire boiler and engines. These are regularly operated on Steam Up! Days, when the waterwheel is also run.

A visit to Coldharbour Mill is a rare chance to step back in time and experience the sights and smells of a traditional factory from the impressive chimney that dominates the village of Uffculme right through to the unique smell of wool and oil. Many of the exhibits are interactive and the factory floor is largely unchanged since Victorian times with line shafting carrying power around the factory.

Guided tours and experienced craftspeople take you through the story while the café is set on the leat edge where fish and kingfishers now dominate the waterway. The factory shop sells a wide range of Mill produced goods. Children’s trails and dressing up are also available. We have a membership scheme for regular visitors which also holds additional benefits.

Coldharbour Mill is only 5 minutes by car from Junction 27 of the M5 - follow the signs to Willand (B3181), then the brown tourist signs saying ‘Working Wool Museum’ to Uffculme.

There are bus connections from Exeter, Cullompton, Tiverton, and Taunton (see below).

The stop nearest the Mill is ‘Russet Close/Coldharbour Mill’ - 5 minutes walk to main entrance via the car park.

There is a lift
Lift buttons have raised numbers or letters

Level access (i.e. no steps or thresholds) or access by a ramp or lift to the:
Cafeteria
Meals for guests with special dietary requirements can be provided

* Open Tuesday to Thursday, also bank holiday Mondays, and some Sundays for special events and Steam Days, please check the What's On page of the Coldharbour Mill website. Adult groups and school parties are welcome every day throughout the year by prior arrangement. Please phone or email for more information, and to make a booking.