You are here > What's On 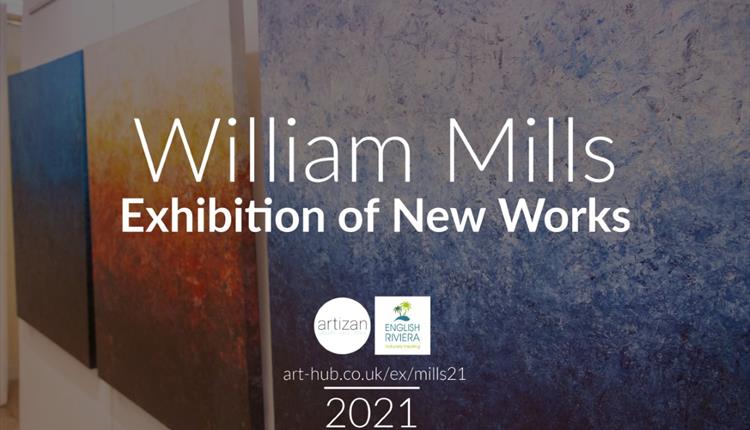 Following a successful Devon Open Studios, William will be showcasing a new series of paintings that visitors to his studio in September will have perhaps seen him embarking upon.

As well as featuring some of the towering evocative paintings that have typified his practice, for the first time he will also be exhibiting a collection of smaller studies that compliment these statement pieces. These scaled down works offer a new exploration of the multi-layered experience William looks to create; paintings that can be viewed as seascapes, skyscapes, or a world in between, are now revealed through a macro and micro lens.

'I want viewers to be able to scour every detail of the canvas and never find any evidence of tools, brushwork or any form of deliberate human manipulation. It's an exhaustingly time-consuming process, slowly covering my tracks with layers upon layers of paint, but the reward when every inch of the painting has something interesting to say makes it so infinitely worth it.'

Painting professionally for approaching three years, William's rapid rise to international notability was first achieved in his locality. In 2020 he was awarded the New Elizabeth Bovill Trophy for works entered into the Torbay Guild of Artists annual showcase, judged by another of Devon's most successful contemporary talents, artist F. G. Davis. In the same year, he later received the Joanna Radford Prize from Devon Artist Network, a prestigious marker that has often predicted the success of upcoming artists from the region.

This local recognition means that you may very likely now stumble across commissions from Mills' adorning homes across Devon. But for every piece that is to be found between the coasts of the South West, there is at least one sibling on another continent, as international collectors have discovered his emerging work.

There will be the opportunity to talk to William and hear more about his work and practice at a special evening private view on Thursday 21st October 6.30 – 8.30pm