You are here > What's On > Torbay Airshow 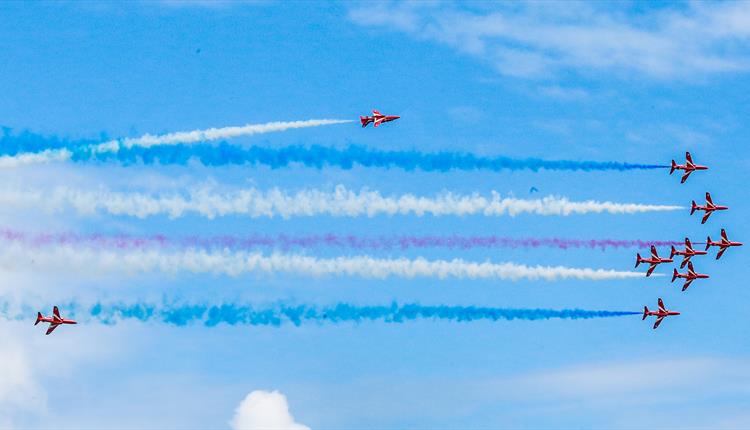 Events are centred around Paignton Green, with free entertainment for all the family, including exhibition stands, bars, food stalls, display teams, inflatable slides, bouncy castles and fairground rides. Torbay Airshow visitors can also indulge in a range of retail therapy, including gifts, toys and festival essentials. Of course, it’s up in the sky where the breath-taking aerial action takes place, with a packed two-day programme of stunts, displays and flypasts.

The RAF Red Arrows will once again make their UK debut performance at the 2019 Torbay Airshow.

The Airshow, which takes place on Saturday 1 to Sunday 2 June, has today announced the RAF Red Arrows, RAF Typhoon Display Team and the Battle of Britain Memorial Flight will feature at this year’s event. The Airshow’s Royal Air Forces allocation also includes the RAF Tucano T1 which has never been seen at the Torbay Airshow before.

This be the public’s first opportunity to see the new display for the 2019 season and will be one of only a handful of Red Arrows displays in the UK this year. The famous Red Hawk Fast Jets will be heading to the USA in July, which will see them display at several stateside airshows – the first time they have so in more than a decade.

It’s always an honour to witness iconic aircraft of yesteryear and the 2019 Torbay Airshow will welcome three of the greatest aviation icons of the 20th century; the Dakota, Hurricane and Spitfire. Part of the astounding Battle of Britain Memorial Flight, these three WWII icons will grace the skies above Paignton Green once more.

Also gracing the skies, but with a little more power and volume, will be the awe-inspiring RAF Typhoon Display Team and this impressive feat of aviation engineering always goes down  a treat with Airshow fans.

Airshow fans will also get the chance to witness an aircraft never before seen at Torbay Airshow, the RAF Tucano T1.

For nearly two decades The Tucano T1 has been the fast jet trainer of choice to RAF and Royal Navy aircrew on their training to frontline fast jet aircraft.  From its base in North Yorkshire the Tucano flies sorties as far away as Wales and central Scotland, with its economy of power combined with jet-like handling making it capable of providing a full range of aircrew training.

With our RAF allocation now confirmed, Airshow fans can now expect news of the civilian aircraft and display teams to be announced in the coming weeks and months.

All air displays are subject to change depending on weather conditions and operational commitments that could take the military displays elsewhere at short notice.

The event is run by Torbay Council with partner organisation Richmond Event Management.

The airshow is completely free (although car parking passes can be purchased) and there are some great clifftop vantage sites across the Bay, as well as Paignton Green itself. If you are staying in Torquay, we would recommend perching up on Daddyhole Plain, while both Beacon Quay, Meadfoot Beach and Thatcher Point are also very popular. If you are over in Brixham, we would highly recommend both Berry Head and Battery Gardens, while more great spots in Paignton include Roundham Head and the end of Paignton Pier.
Hospitality upgrade packages are also available. The Family Fly By ticket gives families the opportunity to enjoy the airshow in a secure location on Paignton Green, complete with toilets, a designated seating area and a VIP food and drink area.

Everything you need to know about Torbay Airshow​