You are here > What's On > Question of Sport 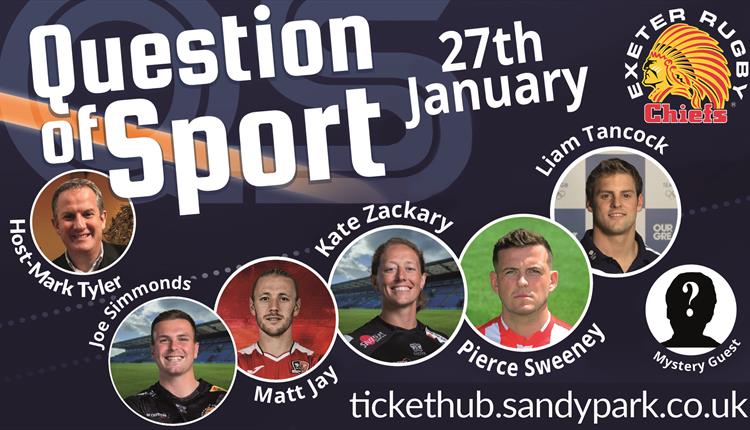 Six of the Westcountry's top sports stars will make up the teams for the return of our Question of Sport event, at Sandy Park on Thursday 27th January.

Based around the same successful workings of the hit BBC show, the stars will have their sporting knowledge tested during a series of fun-filled rounds that will be overseen by quizmaster Mark Tyler.

This time around we're going to be welcoming some past favourites as well as some new stars to the panel!

From the Exeter Chiefs, we've got Joe Simmonds, outside half & play maker who led the Club to their famous double winning triumph in 2020! We also welcome Kate Zackary, Women's Team Co-Captain, and International Star for the USA Eagles, who has made a huge impression during her time in the Chiefs Setup!

We welcome two stalwarts of the Exeter City Football team, in Pierce Sweeney & Matt Jay, who between them have over 350 appearances between them for the Devonshire Club!

Finally we have Liam Tancock, Olympic Swimmer and Exeter local, who has been a part of our Question of Sport Panels in the past!

We will also be welcoming one Mystery Guest who will be confirmed closer to the night, so stay tuned to find out!

Tickets priced at £18pp include food which is: Chicken, Brie & Bacon Jam Burger with Chips

Tickets priced at £18pp include food which is: Chicken, Brie & Bacon Jam Burger with Chips