You are here > What's On > Comedy Soiree 2 : Ashburton 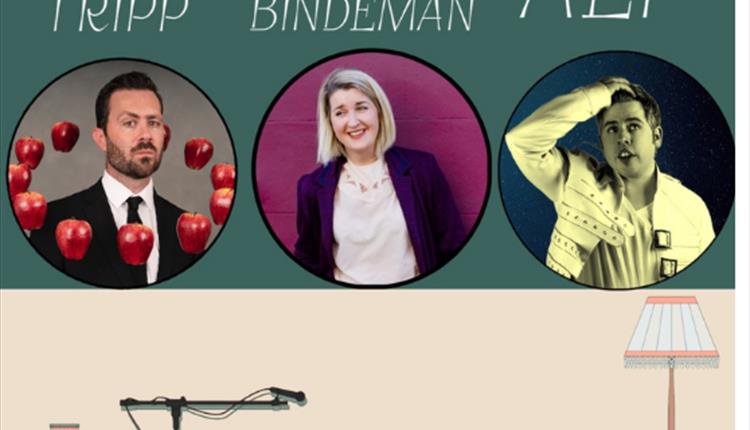 Last August's Comedy Soirée was a rip roaring success with plenty of bums-on-seats and laugh-out-louds! So successful in fact, that it's happening again. With a cracking line up of comics booked in, this fun filled evening promises to be a real lift in these uncertain times. Featuring the cream (before the jam) of Devon comics and a return headline set from the mysterious Ed Tripp. All hosted by the anarchic Willtordian Ballorian Edwardian.

Ed Tripp: A stand-up poet, writer and visual artist, living in Devon. Edward has previously brought his unique brand of spoken-word to nights and festivals such as Spork! Poetic License and WOMAD. (Edward may be known to some by his previous pseudonym, 'Roisin's Brother')
"Strange, surreal and side-splittingly funny" - Razz Magazine
"Dave Allen meets David Lynch" - The Spoils Collective
"…he's been known to cover himself in yeast and wield papier mache effigies of his mum's head, whilst delivering profound and universal truths…" - Spork!

ALF: A gloriously silly and hilarious one-liner prop comic. A multitude of achievements under his belt including: 'So You Think You're Funny' finals in Edinburgh, "Standup for Cider" competition winner. In 2018 he auditioned for Britains Got Talent at the London Palladium and received a Standing Ovation from the Judges and the Audience and in 2019 he was a finalist in the UK Pun Championships and the World One Liner Championships. Unmissable.

Eva Bindeman: Another star of the Bristol comedy circuit, Eva has begun headlining nights in and around the South West and you will soon be paying big money to see her!

In a time where we are all looking for a little escape, this show is a great way to have a giggle and actually meet up with friends in real life.

Hosted by 'The Soirée Crew'