You are here > Things To Do > Tarka Valley Railway 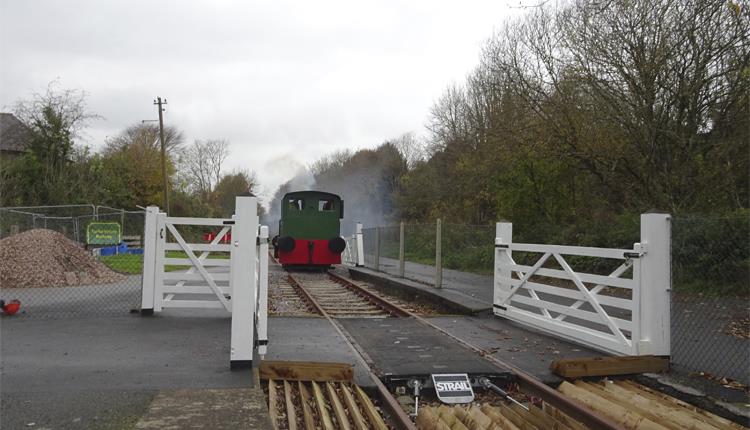 The Tarka Valley Railway Group was formed in 2008 to preserve what remained of the railway at Torrington. Passenger services had closed in late 1965 and by the 1990’s the track had been lifted and the area overgrown. However, following closure of the railway, there was a proviso that that the tracked should not be built on in the event that the railway would still be required by Network Rail. Devon County Council then became the owners of the tracked. In 2015, the Railway Group became a Charitable Incorporated Organisation (CIO).

The objectives of the railway are:

To advance education about the history of transportation in the Torridge Valley area and railways in particular.

These objectives will be achieved by establishing and maintaining an operating heritage railway alongside the Tarka Trail based upon Torrington Station. The railway will re-instate and finally re-open a section of the original railway which closed in 1984.

The group gained planning approval in March 2013 for the first phase of its’ plan to extend the existing track by adding approximately 160 metres of running line and 110 metres of sidings on the original alignment of the railway in Torrington Station. This will take the line as far as the first occupation bridge over the trail after the station building.

A lease was granted to the Railway from Devon County Council in April 2018 when the re-instatement work commenced. Since then, a great deal of activity has taken place which will culminate in Spring 2020 when the “King Point” will be installed and track panels laid as far as the over bridge to the north of Torrington.

The future will involve progressing the line towards Bideford with several larger projects needing to be addressed such as the river viaduct and Landcross tunnel but these can be overcome. The Office of Road and Rail Regulation has been consulted and solutions are possible.

It is also intended to establish a railway heritage and educational centre at Torrington with information displayed on the history and development of the railway, the Rolle Canal and the local ball clay industry.

The Railway currently has two diesel shunters on site:

“Progress”, a John Fowler built locomotive which was fitted with a six cylinder diesel engine in 1977. Its’ working life was spent at the Peters Marland Clay Works before being re-housed at the Bodmin & Wenford Railway. It returned to Torrington in 2008 and is now in running and working order.

“Torrington Cavalier”, the last Ruston Hornsby to be built in 1969 and worked at the Nevils Dock & Railway Company until 1990. It then went to Chasewater Railway Staffordshire and was acquired by the Railway in 2017. It is currently undergoing restoration although the engine now runs.

The Railway is situated on the main A386 Bideford to Torrington Road at the side of the Old Torrington Station which is now the 'Puffing Billy', a licensed cafe.

Busses stop directly outside. Services 5B and 75 from Barnstaple via Bideford on a 30 mimute frequency.

The nearest rail station is Umberleigh on the Barnstaple to Exeter line.

Designated parking provided for guests with disabilities
Drop-off point for guests immediately outside the main entrance
Route from the parking area to the nearest public entrance is:
Flat, ie. without steps

Level access (i.e. no steps or thresholds) or access by a ramp or lift to:
Public toilet suitable for visitors who use a wheelchair

Seating available throughout the attraction at appropriate intervals, for visitors with limited mobility