You are here > Things To Do > Hartland Abbey & Gardens 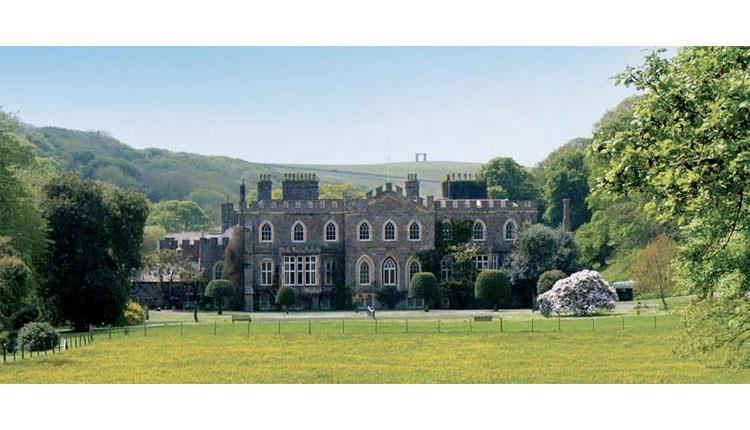 A day out at Hartland Abbey, a stately home in a stunning setting a mile from Hartland Quay on the north-west Devon coast, is to step back in time. The award-winning house, with its fascinating interiors and decoration, beautiful woodland walks, walled gardens and parkland, has been in the same family ownership for generations and provides a warm welcome to visitors. A popular film location, a display shows all the productions shot here since 1934 to the present day, including ‘Sense and Sensibility’ and ‘The Night Manager’. New displays for 2020 are ‘A Victorian Honeymoon’ and ‘Falconry by The Hon Gerald Lascelles’. You can even stay in one of our characterful holiday cottages in this lovely corner of North Devon, on the Hartland Peninsula. Our café provides delicious home cooking and refreshments.

Experience the warmth and friendliness found only in a cherished family home. Peacocks, donkeys and black sheep wander the beautiful parkland and there are plenty of open spaces for children to explore; the Quiz and Nature Trails are great ways to keep the children entertained!

Woodland walks lead to the restored Summerhouse in the woods, the Gazebo and the wild Atlantic cove at Blackpool Mill where the BBC filmed scenes for the hugely popular, and Golden Globe winning, 'The Night Manager' by John Le Carre starring Hugh Laurie, Olivia Colman and Tom Hiddleston. BBC 'Sense and Sensibility' starring Dan Stevens, Rosamunde Pilcher's 'The Shell Seekers' and in 2017 'The Guernsey and Literary Potato Peel Pie Society’ starring Lily James and Michiel Huissman, were also filmed here. BBC Antiques Roadshow with Fiona Bruce was filmed at Hartland Abbey in 2011. During 2019 Enid Blyton’s ‘Malory Towers’ was filmed for CBBC in the house and gardens; thirteen episodes are due on TV in April 2020. Hartland Quay, part of the Hartland Abbey Estate, was a location for Daphne du Maurier’s ‘Rebecca’ starring Lily James, Kristen Scott Thomas and Armi Hammer filmed by Netflix for showing in 2020. Our 'Filming on the Hartland Abbey Estate since 1934' exhibition displays stunning images of behind-the-scenes filming and film stars including Alan Bates, Michael Caine, Billy Connolly and Tom Hiddleston.

Built in the 12th C, Hartland Abbey survived as a monastery longer than any other in the country. In 1539, Henry VIII gifted the abbey to the Keeper of his Wine Cellar and the house still remains in the family. The impressive interiors span Medieval, Queen Anne, Georgian, Regency and Victorian periods. Of special interest are the three main Reception Rooms, the Alhambra Corridor by Sir George Gilbert Scott and the Gothic Library by Meadows with its Batty Langley fireplace. The circular table by Jupe dominates the Dining Room. Important paintings by artists including Reynolds and Gainsborough, furniture, porcelain, early photographs, the Museum, the Dairy, the 'William Stukeley - Saviour of Stonehenge' Exhibition, documents from 1160 and changing displays of family memorabilia fascinate visitors. Hartland Abbey is probably the most historically important ancestral home in North Devon and contains much of national interest.

Walk under a huge tree rhododendron to woodland gardens of camellias, azaleas and hydrangeas, the Gertrude Jekyll designed Bog Garden, Fernery and 18thC Walled Gardens. Now restored after decades of neglect, visitors can experience these romantic gardens as they were a century ago; massed tulips, spring bulbs, mixed borders, roses, tender and rare plants, organically grown vegetables and fruit flourish within the shelter of the mellow stone walls and rebuilt glasshouses. Walk to the Summerhouse, the Gazebo, the beach with views to Lundy Island and Blackpool Mill Cottage; explore newly discovered paths, overgrown for a century, through bluebells and wildflowers in spring. There are up to 3½ miles of lovely walks and dogs are very welcome. Or just sit in the sun and relax...

The award winning Old Kitchens Tea Room serve homemade light lunches, cream teas, scrumptious cakes and a choice of teas and coffees. Wherever possible organically grown produce from the Walled Gardens is used. The Gift Shop sells a lovely range of cards, books and gifts. Flat car park adjacent to the house for cars and coaches. Dogs are also welcome in the gardens and the walks.

Hartland Abbey can be hired for weddings and special events.  The estate also has two lovely cottages which are available to rent for holidays. One of them was even used in the filming of the BBC’s ‘Night Manager’ and ‘Sense and Sensibility’!

Please see our website www.hartlandabbey.com for all further information and special events.