You are here > Things To Do > Clovelly 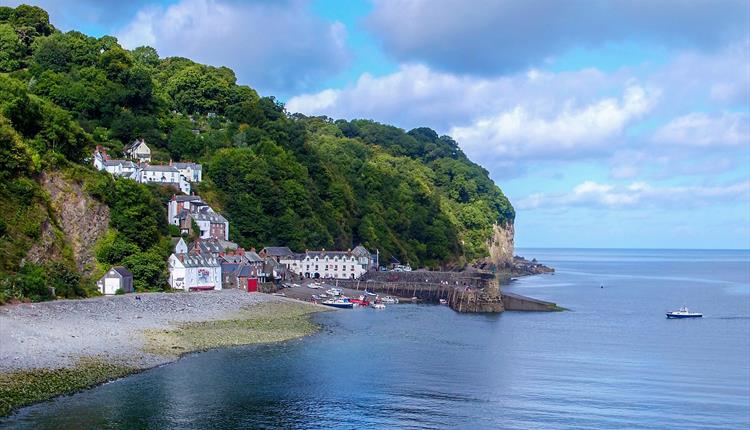 The picturesque, ancient, fishing village of Clovelly is uniquely special and was once owned by the Queen of England.  From Elizabethan days until today, Clovelly has been in private ownership, which has helped preserve its original atmosphere.

Clinging to a 400 foot cliff, it has no vehicular traffic, just donkeys and sledges. Its steep, cobbled street tumbles its way down to the ancient fishing harbour and C14th quay. It is a descent through flower-strewn cottages broken only by little passageways and winding lanes that lead off to offer the prospect of further picturesque treasures. It combines a rich environment and an historic village, with so much to see and explore.

This famous cobbled street, known as 'Up-a-long' or 'Down-a-long', was built of stones hauled up from the beach. Man-powered sledges transport all goods to the village, from groceries to furniture. Donkeys used to be the main form of transport for centuries, but now mainly give children rides around their meadow during the summer or can be seen posing for photographs in the street.

The many literary and artist connections; Charles Kingsley, Charles Dickens, William Turner and Rex Whistler, all help to make this a unique experience.  Kingsley lived here, Dickens wrote about it, Turner painted it and Whistler featured it in much of his work.

There is much to see and do such as watching the film of the history of the village, visiting the extensive souvenir shop in the Visitor Centre, watching skilled craftsmen in the converted stable yard creating beautiful silks and pottery before exploring the village where you can visit two museums, Kingsley Museum and Fisherman’s Cottage. Or book and take a village tour with a guide who is a mine of information about village history and traditions.

Clovelly has two hotels: the 400 year old New Inn, in the heart of the village and the C18th Red Lion on the quay, which provide delicious lunches, dinners and Devon cream teas.  There is the Quay Shop at the harbour for take-aways to enjoy on the quay while watching the harbour traffic come and go.  Boat trips are available to take you along the dramatic coastline.

Once a bustling fishing port, Clovelly was renowned for its herring and mackerel and, although fishing has declined, it is still very much a part of village life. Clovelly is also today famous for its lobsters (and crabs), which are sent away as far afield as France and Spain. In past centuries, the coastline was occupied with smuggling, wrecking and piracy and was notorious for shipwrecks, so since 1870, Clovelly has also had its very own lifeboat.

For those who do not want to walk back up, there is a fare-paying Land Rover service for much of the year to return you to the top of the village where you can also visit Clovelly Court Victorian kitchen gardens and see its splendid herbaceous borders and magnificently restored Victorian glasshouses. It lies adjacent to the C13th parish church of All Saints.

Clovelly offers breath-taking scenery and lengthy walks along the cliff tops. Hobby Drive, built after the Napoleonic wars to give employment to Clovelly's returning soldiers, winds its way through woods and offers superb views of both Clovelly harbour and Bideford Bay. Walking the other way takes you along the dramatic North Devon stretch of cliffs towards Hartland Point, taking in the little carved shelter of Angel's Wings and the Wilderness Summerhouse with its magnificent view over Mouth Mill Cove, once the haunt of smugglers.

The modest admission charge to Clovelly includes parking, the must-see film of the village history, two museums, Clovelly Court Gardens and a contribution to the preservation of this very special private estate.  Dogs on leads are welcome.

Nearest train station is Barnstaple.  Buses run from Barnstaple and Bideford to Clovelly.

Level access (i.e. no steps or thresholds) or access by a ramp or lift to the:
Cafeteria
Meals for guests with special dietary requirements can be provided

Staff have had disability awareness training

* Clovelly is open all year round, except for Christmas. Open for free on Boxing Day. During the summer months, open from 9am to 6pm. For other opening times, please call the Visitor Centre T: 01237 431781 or email: visitorcentre@clovelly.co.uk