You are here > Home > Things To Do > Braunton Burrows 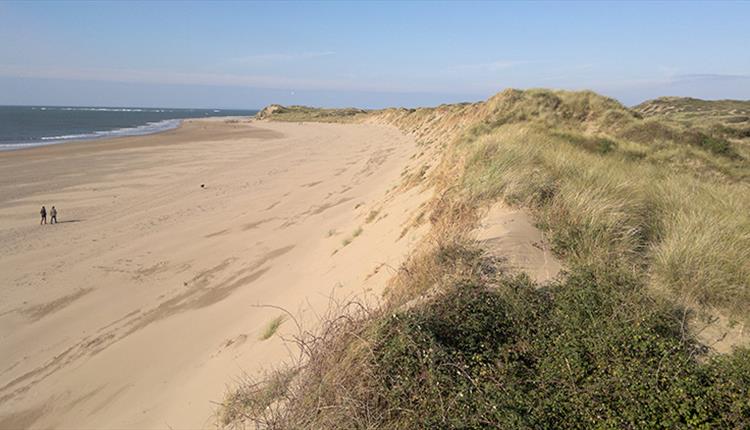 Braunton Burrows, is one of the largest sand dune systems in the British Isles. At the heart of the North Devon Area of Outstanding Natural Beauty (AONB) it is a UNESCO designated Biosphere reserve.

The Burrows is approximately  1000 hectares in size (one hectare roughly equates to the size of a football pitch!), divided between dunes (high ground) and slacks (low ground). Flanking the 3.5 mile long sandy beach of Saunton, the Burrows is privately owned by the Christie Estate although the public are welcome to use it.

What makes Braunton Burrows unique is its rich diversity of plant and animal life, with 470 species of flowering plant (including 11 species of orchid alone). It is also home to a wide range of fauna – an abundance of insects that includes 33 species of butterfly, many nesting birds and 5 of the 6 reptile species found in the UK.

The Burrows can be accessed from three car parks - Saunton Beach, Sandy Lane (which is in the heart of the Burrows) and Crow Point. A Braunton Burrows map and guide, downloadable from the Christie Estates website,  provides useful information, an I-Spy section for kids and details two circular walks. The Countryside Centre, in nearby Braunton, also has displays and information about the Burrows' habitats.

A wonderful place to explore and enjoy, the Burrows is particularly vibrant from the end of May to August, when much of the open dunes are covered with a spectacular carpet of flowers. Its name comes from the rabbits which, for many years, kept the scrub levels down, allowing plants and flowers to thrive.

Due to declining rabbit numbers cattle are now used to graze the undergrowth, consolidating clearance work which is necessary to reduce the levels of invasive scrub. The herd is made up of Devon Reds, a hardy traditional breed - indigenous to North Devon  - which graze between three dedicated zones year round .

Dog walkers are asked to respect a few simple guidelines in respect to exercising their animals around livestock, such as keeping dogs on leads in areas where cattle are grazing. Signage on stiles and gates gives information on grazing status, as does the dedicated Braunton Burrows Public Information page on Facebook.

Rich in natural history, the Burrows also has an interesting association with World War Two. It was chosen as the site to establish the Assault Training Center by the American army  as it prepared for the D-Day invasion. Between 1943 - 1944, over 10,000 American GIs trained in the sand dunes and remnants  of this era remain in the form of mock concrete landing craft and a bazooka wall.

This heritage is celebrated with an annual D-Day event which takes place on Saunton Beach during the first weekend of June, involving  living history groups and period vehicles from around the UK. Meanwhile, parts of the Burrows continue to be  used by the Ministry of Defence, which still uses the challenging terrain to train personnel and test equipment.