You are here > Home > Things To Do > Beer Quarry Caves 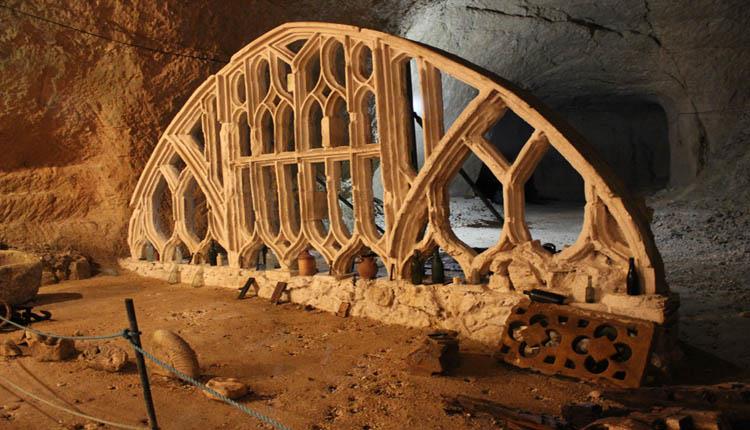 Our guides will take you on an hour-long tour through the awe-inspiring caves, with their mighty halls of vaulted roofs and pillars of Beer stone which have been likened to a vast underground cathedral.

Listen to the amazing stories of the local quarrymen who worked 14 hours per day 200ft below ground in appalling conditions and the employment of children as young as eight years old.

Visit the small museum featuring a late medieval Beer stone church window, to marvel at the skill of the stonemasons and the basic tools used by the quarrymen, who risked their lives to extract the stone from the underground workings.

Many of us marvel at the intricacy of stonemasons’ work found on numerous stately buildings, cathedrals and churches. But do we ever stop to consider where the stone comes from and the history of the excavation behind it?

The caves have a long and interesting history, which not only includes quarrying, but also as a refuge and place of worship for Catholics facing persecution and a hiding place for smuggled contraband!

But to enable stonemasons to carve the intricate designs, Beer quarrymen endured centuries of working in appalling conditions to provide the perfect carving material.

See for yourself the methods used to quarry and deliver the huge blocks of stone, imagine the daily dangers faced by the workers to each quarry a four ton block per day, working only by the light of flickering tallow candles.

On your visit you will see:

- The Roman chambers house a small museum with Beer stone carved centuries ago the basic hand tools used to excavate the stone and archive images of the men at work and the horse drawn wagons used to deliver the huge blocks, often hundreds of miles

- Inscriptions written by the quarrymen and carved by stonemasons

- The change in the caves’ chambers as they were quarried from Roman, Saxon and Norman times to the last century.

- The methods used to quarry and deliver the huge blocks of stone often hundreds of miles on horse-drawn wagons and barges which sailed from Beer beach.

Described by Sir Tim Smit, co-founder of the Eden Project as “A moving and Inspirational place. Inspiring awe at the labours and skills of man throughout 2,000 years and particularly moving because of the injustice of a system which allowed their labours to be valued so lightly. A must- see destination and the best guided tour I have ever had” Sir Tim Smit, Eden Project”