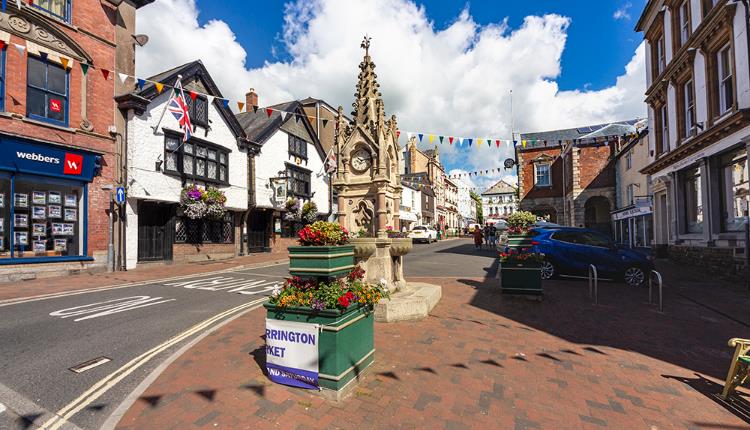 Built on the site of an ancient settlement atop an inland cliff with the River Torridge below, Great Torrington is a friendly, welcoming market town which enjoys spectacular views across rolling hills and unspoilt green countryside.

Things to do in Great Torrington

Great Torrington is full of independent shops offering unique items, many of which are made by local crafts-people.  Regular markets are held in the Victorian Pannier Market on Fridays and Saturdays and there are often pop-up craft events and shops at Castle Hill, in the Town Hall and at The Plough Arts Centre.

Fancy taking in a show?  The Plough Arts Centre is a welcoming and dynamic venue for arts events showcasing a mix of local and national talent to suit the whole family, including theatre performances, concerts, comedians, art exhibitions and workshops.

There are a wide range of other attractions in and around the town too. Explore the enchanting gardens of RHS Rosemoor and take a leisurely stroll through the huge variety of formal and informal gardens; take a factory tour around Dartington Crystal to experience the traditional craft of glass making followed by a visit to the UK’s largest glass shop; visit the Heritage Museum to find out more about the fascinating history of this important market town or, spend a few quiet moments in the magical Secret Memorial Garden just a few paces from Sydney House Car Park which was created as a memorial to five young evacuees who tragically lost their lives in a fire close by at Sydney House.

Great Torrington is connected to many local villages and towns via a network of walking and cycling trails, including the Tarka Trail, a 180-mile figure of eight which runs through North Devon following the route taken by the fictional Tarka the Otter in the famous novel by Henry Williamson.

Great Torrington hosts a number of events throughout the year including a parade every February to commemorate the Battle of Torrington in 1646, the annual Mayfair and Carnival celebrations during the first week of May, a bonfire every November for Guy Fawkes Night and a Christmas Lights switch-on event in the town centre.

In 2022 the town will be celebrating H.M. The Queen’s Platinum Jubilee with a ‘fun-day’ and lighting of a beacon on Thursday 2nd June and a Big Jubilee Community Picnic in the town centre on the afternoon of Sunday 5th June 2022. Throughout the summer months the town will play host to a variety of street musicians on Saturdays in the town square and Pannier Market. On Saturday 10th September we will be hosting a one-off History Alive event to showcase Great Torrington’s rich heritage which dates all the way back to the 8th century AD.  The event will involve plenty of free, fun, educational and interactive ‘living history’ activities which will highlight important milestones experienced by our relatively small but hugely significant Northern Devon Market Town throughout the ages.

Great Torrington has a variety of eateries and pubs including several cafes in the town centre serving locally produced delights.

The countryside around Great Torrington is brimming with spectacular flora and fauna and thanks to its prominent hilltop position, boasts impressive views over the surrounding area.  The town is enveloped on three sides by 365 acres of common land given to the people of Great Torrington in the 12th Century and since 1889 administered by a Committee of Conservators.  The area is freely accessible to all, and visitors can walk the 20 miles of footpaths, ranging from the 9-hole golf course in the north; ancient wood and wild flower meadow in the west; and dropping down to the beautiful River Torridge to the south of the town.

Great Torrington has a long and varied history. As ‘Toriton’ it is mentioned in the 1086 Domesday survey of Devon while the remains of Neolithic and Iron Age settlements show that people have lived in the area for thousands of years. In the 12th century, Toriton was designated a borough under the control of a succession of local barons; the town evolved to become the busy centre of a thriving agricultural economy with people travelling from miles around to trade at the large weekly markets.

Although the Normans and their successors built a castle and fortifications to take advantage of its position overlooking the valley, the town was recorded as peaceful until the 17th century. In 1646 the town played its part in the English Civil War when the Parliamentarians under Sir Thomas Fairfax defeated Lord Hopton and his Royalist army. The Battle of Torrington marked the end of Royalist resistance in the West Country, leading to the defeat and execution of Charles the First and a significant step towards our current parliamentary democracy.

Through the Middle Ages the wool industry grew and thrived but by the 18th century was overtaken by glove making as the town’s main employment. The next two hundred years saw the growth of factory-based work, a canal was built to transport heavy goods, a railway to the town was opened in 1872 and the town became home to the largest dairy in Europe. Great Torrington’s heritage remains accessible through existing homes, civic buildings, disused factories, monuments, infrastructure and landscape. Like most towns it has been home to people who are of historical interest such as Lady Margaret Beaufort, the grandmother of Henry VIII; Thomas Fowler, inventor of central heating and a wooden computer; William Keble Martin, botanist and illustrator; and, of course, Tarka the Otter.

Great Torrington’s rich history can be further explored at the town’s Museum and self-guided History and Civil War Trails will soon be available.

Fascinating history, arts, crafts and culture, a beautiful setting and friendly locals all make a visit to Great Torrington worthwhile.

Trains to Exeter St Davids run direct from Plymouth, Taunton, Bristol, London and other cities. The 5B bus leaves from in front of the station (stop A), every two hours Monday to Saturday (no buses Sunday). It’s a scenic 90 minute journey to Great Torrington.

Alternatively, you can take the train to Umberleigh or Barnstaple on the Tarka Line. Umberleigh is a request stop, from where you will need a pre-booked taxi. Barnstaple has a taxi rank and the 5B bus to Great Torrington.